Growing reports of seaweed-covered beaches are reaching traveler’s ears who are beginning to worry about the quality of their beach vacations in the Caribbean and Central American Countries. 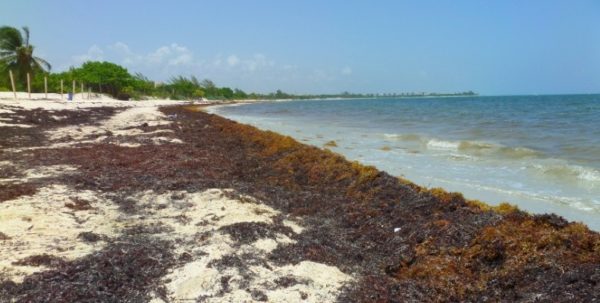 The aforementioned reports have prompted resorts to take extreme measures to control the onslaught of sargassum that can overwhelm beaches in the region. However, the public should not be alarmed for sargassum isn’t something that happens daily. It doesn’t take place every day nor on every beach.

Public relations director for the AHRM, Ana Mari Irabien, declared “Sargasso is a regional problem that affects not only Mexico but the entire area of the Caribbean and the coast of Central America, as well the South Florida coast.”

She explained that one of the reasons for this regional and ongoing problem is climate change but that most resorts in the Riviera Maya are taking many measures to combat the buildup of seaweed.

“Five years ago, as this problem was beginning,” continued Irabien. “The tourist industry (mainly hoteliers) hired additional staff to carry out the harvesting of the Sargasso on the beach. As the problem has been increasing, some companies have resorted to buying specialized machinery to collect seaweed on the beaches as it is manually a very heavy job”.

Both, short and long-term solutions, are now being developed by the hotel industry so that guests can have access to the best possible experience at resorts throughout the region.

For instance, Desire Riviera Maya Resort recently announced that they have successfully provided a sargassum-free beach since April. Their 918-foot-long linear barrier has a cost of $60,000. The colossal 1.6-foot-deep structure swiftly collects approximately 1 ton of sargassum per day.

A similar barrier system will soon be installed in Desire Riviera Maya Pearl in the coming months.

Officials in the region are not shrugging off the problem and have convened to work on solutions for the sargassum problem.

“Quintana Roo made the call for the first regional meeting with the Caribbean and Central American countries at Moon Palace Resort,” Irabien stated. “In this meeting, we hope to work out plans and regional strategies that will be put into place to enable us to carry out actions that will lead us to control the massive arrival of sargasso.”

“President Andres Manuel Lopez Obrador has instructed the Secretary of the Navy to lead the work and actions of removal, withdrawal and final destination of the sargasso in Quintana Roo and other states to solve this problematic growth,” she continued. “The Mexican Navy will build special vessels to collect the seaweed in the ocean.”

Keynote speakers Donald R. Johnson and James S. Franks, senior research scientists at the Gulf Coast Research Laboratory, were among the many prominent scientists who attended this historic meeting. The 13 countries also agreed on a way forward, with 26 points that focus on long-term solutions.

The group agreed to work on both long- and short-term strategies and to pool resources and strengthen communication, To resolve the problem. To assist countries in monitoring sargassum biology, arrival and collection cycles, social research and public health, industrialization, education and more a website has been developed.

The group not only promises to take action against the proliferation of sargassum but also showing their advance through documentaries that will be broadcasted on open television.

We all hope the efforts of this fellowship assembled in this summit help restoring the affected pristine waters of the Caribbean Sea to its splendor.